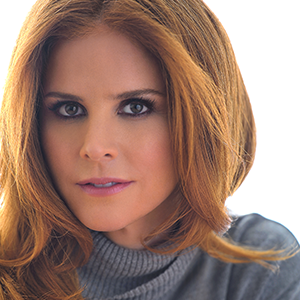 Rafferty grew up the youngest of four daughters in Connecticut. While in high school at Philips Academy, her drama teacher caught her running across his lawn trying to get to field hockey practice on time. He told her to skip practice and join the cast of Richard III, and thus began her love of theatre.

Rafferty has numerous theatre credits in New York, including appearances at Second Stage, The Roundabout Theatre Company and The Lucille Lortel.

While starring opposite Kathleen Turner and Charles Busch in his play, The Third Story, The New York Times’ Ben Brantley called Rafferty “a screwball charmer”.

Rafferty has appeared at many regional theatres across the country including productions and workshops of several new plays at South Coast Rep. and Shakespeare & Company where she played Rosalind in As You Like It. She also voiced several radio plays for The Plays the Thing on NPR.

On television, Rafferty has guest starred on several comedies and dramas including Brothers & Sisters, Law & Order: Criminal Intent, Six Feet Under, Without a Trace, Bones, Samantha Who? and 8 Simple Rules.

She starred opposite Gena Rowlands in the television movie, What if God were the Sun. She was also seen in independent features Falling for Grace and Small Beautifully Moving Parts, which debuted at The Tribeca Film Festival and South by Southwest, respectively.

Rafferty currently resides on both coasts with her husband and two daughters.

She credits her mother, the Chairwoman of the English Department at Sacred Heart in Greenwich CT, and her father, who enjoys two successful careers in finance and oil painting, for cultivating her passion for the arts.